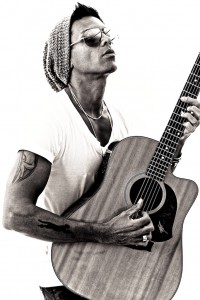 For all those who followed Andrew De Silva on his journey to winning the reality TV show Australia’s Got Talent in 2012, you will be somewhat familiar with his story.

From phenomenal music success with his R & B band CDB in the 90s to his fight with cancer and other personal issues, Andrew has put it all behind him and is back in total control.

I was interested to know how life is for Andrew since winning the Grand Prize of $250.000. So, I put some questions to him for inclusion in my music media Blog plus my weekly column in the Melbourne Observer newspaper.

RF: Firstly, how is your health Andrew ?

AD:  Very well thanks, I’m probably the fittest I’ve been in my life. I’m really into fitness & I do my best to keep healthy.

RF: Has the profile from AGT been beneficial in terms of new additional work ?

AD. I used to gig quite a lot before the show as I had many residencies around Melbourne but now, it’s mainly appearances & events. It’s nice to have a break from doing the same gigs every week – although, I was very thankful to be so busy! I also had the opportunity to open for Mariah Carey as well which was awesome.

RF: Has the additional profile helped your music sales?

AD. Yes, I’ve had 3 singles & I’m about to release another single then album. It’s so good to get out some original music again.

RF: Are you getting airplay on commercial radio?

AD. Very! It’s been nothing but a real blessing. Whilst I was on the show, I stopped doing all my gigs just to save my voice so I wasn’t earning anything..Thank God I won!

RF: Was it hard to talk about your stutter and your experience with cancer on National TV to millions of people?

AD. Well, I didn’t plan to. I just started opening up & sharing my life during the interviews. I guess, I felt that I could be helping others & just simply inspiring others.

RF: Was it something that the producers of the show wanted to profile in depth?

AD: They must have because, they like to dig deep into the contestants life. I guess it makes for good TV.

RF. Do you believe you achieved all your objectives by appearing on the show ?

AD: Objectives? Didn’t really have any to be honest except to step out of my comfort zone & see what happens. It was a real last minute decision to audition. In fact, just weeks before the first audition – I tried to back out of it!

RF: How was your Sri Lankan concert/s & when were they?

AD. I went in September 2013. It was quite overwhelming to get such a warm welcome from people there. I took my band with me & the shows were amazing. We all had an experience that we’d never forget. I had only been to Sri Lanka when I was 8 years old, so, it was very special to go there & perform.

RF: Any plans to return for more shows?

AD. I may be there this NYE.

RF: What would your advice be to any artist wanting a career in the entertainment industry?

AD. The main thing I would suggest is to – get really good at your craft & find out who you really are. It takes a while sometimes. Music is one of the most rewarding careers out there, whether you are famous or not.

RF: Ok, so where to from now for Andrew De Silva ?

AD. Well the show was really only the start of the new chapter in my life. The show has been great for me personally. I’ve faced a few challenges head on & my faith has also grown so much. I’m also looking forward to sharing more of my music with Australia.

This entry was posted in News. Bookmark the permalink.

2 Responses to Life After Reality TV for Andrew De Silva.